For the past ten years my work focused on the creation of sheet metal forms based on dynamic, ‘orbital’ curves. This was initially inspired by a series of diagrams drawn by a device recording the interaction of two pendulums, a Harmonograph. The diagrams create an illusion of ribbon-like surfaces that twist freely while retaining a sense of rhythm and symmetry.

These dynamic principles based on harmonic ratios had a strong conceptual impact on my work. Rather than seeing them as superimposed sine waves, they seemed to embody a force field where the centres of gravity of the pendulums represent two attractors and the curve traces out an orbit. I found similar patterns occurring in the simulation of the ‘three body problem’ in astronomy, where one moon orbits two planets. Similar principles were also found in other computational simulations of dynamical systems in physics, where a trajectory weaves back and forth between two attractors.

Personally, these dynamic principles reflected an inner sense of non-verbal perception, of experiencing emotions as attractive and repulsive forces in an almost spatial, kinesthetic way. While dance might be the most obvious medium to translate these perceptions, my background in silversmithing led to the attempt of capturing this sense of motion in metal.

This turned into a PhD research project on the creation of surfaces of negative, hyperbolic curvature in sheet metal at the School of Jewellery in Birmingham, UK, completed in 2004.

Aided by an Arts Council Production Grant in 2006, I started to create work for public spaces. This required a continuing development of tools and equipment to stretch steel at a thicker gauge.

Alongside private, corporate and public commissions, I have been running several community- and school-based projects and I very much enjoy working with young people and helping them realise their creative ideas. I have also lectured at universities in Birmingham and Bangkok and occasionally run master classes in anticlastic raising techniques in Tuscany, Italy. 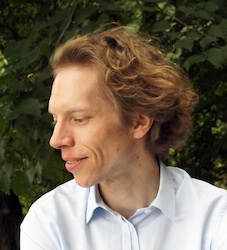